From the upcoming Spring 2020 issue of Signature

The connection between Interstate 280 and New Jersey Route 21 may be one of the most important and unusual interchanges in America’s interstate highway system. The interchange carries about 90,000 vehicles per day through Newark, New Jersey’s largest city, delivering them to other interstates and such vital nearby arteries as the New Jersey Turnpike and the Garden State Parkway. 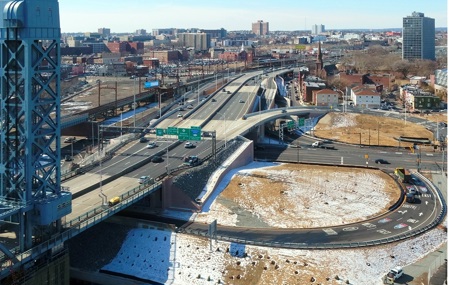 But the I-280/Route 21 interchange definitely is not a typical interstate setting. It’s bordered by historic commercial and residential neighborhoods; indeed, per the original design, a number of ramps connected directly to Grant and State streets in those neighborhoods. Moreover, that original design was missing a number of what are called “moves,” that is, if you were traveling in certain directions on I-280 or Route 21, you couldn’t access the interchange. “You can’t get there from here” was the cry of many frustrated motorists as they sought vainly to reach the interchange.

Also alongside the interchange are active NJ Transit railroad tracks a number of historically significant structures. Most notable among them is Plume House/House of Prayer Episcopal Church and Rectory, located within 30 feet from the project construction footprint. It was built in the early 18th century and considered by some to be Newark’s oldest building.

The interchange itself features a number of landmark elements, including the William A. Stickel Memorial Bridge, a drawbridge over the Passaic River that is infrequently raised by still functional, and the Martin Luther King Bridge. Finally, beneath the interchange is an active and sensitive, approximately 12-foot diameter brick-lined sewer system that services downtown Newark. 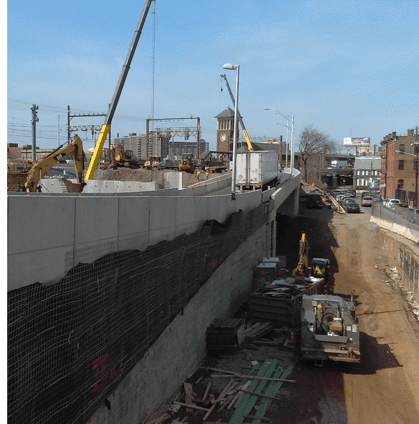 Its unique character notwithstanding, by the turn of this century, the interchange had become a problem. The bridges – and other associated components – had deteriorated significantly while the long lines of traffic on Grant and State were creating bottlenecks and wear and tear on venues unable to accommodate the load. As a result of the dated design, many components of the interchange no longer met current professional standards. Worse, according to the New Jersey Department of Transportation (NJDOT), crash rates on the interchange were “considerably higher than the statistical average for interstate highways,” elsewhere in the state.

NJDOT studied the situation extensively and, in 2012, engaged Michael Baker International to design improvements to the interchange. The $95 million initiative would become one of Michael Baker’s most fascinating and successful projects, involving innovations to achieve multiple objectives: update all obsolete components: improve the interchange’s operational capacity without actually building new roadway; maintain traffic flow during construction; add the missing moves; rehabilitate and replace deteriorating structures; minimize impact to historic structures during and after construction; and avoid disturbances to the railroad tracks and the sewer system. 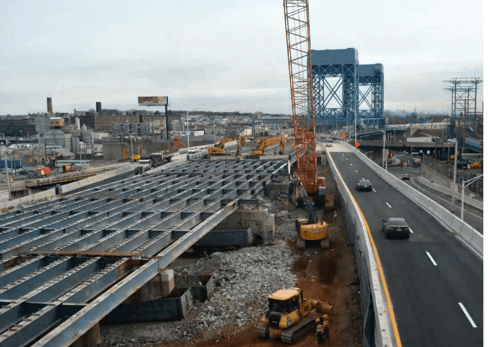 For a project with so many goals – and a construction zone so tightly constrained – one of the first missions of the team, including Michael Baker and primary contractor George Harms Construction Company, was to develop a process that ensured timely communication, flexibility and inclusiveness.

To do this, once construction began in 2015, the team met every two weeks – more often if situations required. All project sub-units could keep tabs on every aspect of the initiative through data-sharing software.

“The teams were located in multiple offices and used data-sharing software and worked with files in real time so changes would not fall through the cracks,” says Mike Sidani, P.E., PMP, Director of Project Delivery Excellence for Michael Baker and Project Manager for the interchange initiative.

The team met frequently with stakeholders – which included businesses, residents and preservation groups in addition to NJDOT and other government agencies – to solicit input, provide information and build trust in the process that was initially lacking.

“We engaged two community outreach firms,” Sidani recalls. “One had intimate knowledge of the local community while the other coordinated public information meetings.”

Through such sessions, the team kept the community apprised of developments that would affect them, outreach that the community came to value. Says Jose Sotto, Engineer – Transportation for Michael Baker:

“Every time we had to close a roadway in a residential area, we communicated with the community two weeks out, letting them know the details and where they could park. They appreciated that and understood that the project ultimately would benefit them.”

“Throughout the public involvement process, the principles of environmental justice, community preservation and context-sensitive solutions were communicated and incorporated,” she says. 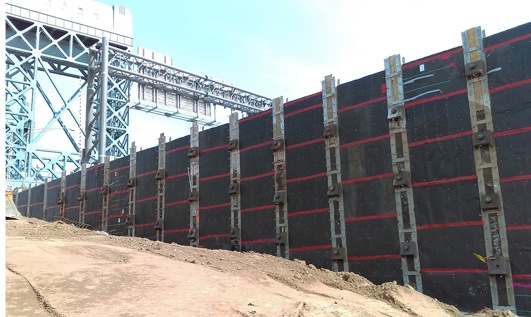 One of the most critical objectives of the project was maintaining the interchange’s heavy traffic flow – with minimal disruptions and shutdowns – while maintaining the existing moves between I-280 and Route 21 for the duration of construction. The team accomplished this in an innovative way; it designed and built elevated temporary roadways retained by mechanically stabilized earth (MSE) walls atop permanent MSE walls. All east- and west-bound traffic was diverted to the temporary roads, providing for free traffic flow and eliminating the need for numerous, and potentially unsafe, sub-stages and cattle chutes – a nickname for a narrow corridor that guides traffic during construction.

“This left a large work zone available to the contractor to do the work in its entirety,” Sidani says. “Plus, it significantly minimized traffic disruptions.”

The team also modified the interchange’s original design so that ramps would no longer dump traffic directly onto Grant and State streets; instead, I-280 traffic would exit to Route 21 and from there to local roadways – an enormous safety update. Just as importantly, the team added all the missing moves and installed appropriate signage so that motorists could more easily and safely reach their destinations.

Bringing bridges up to standard and extending their useful lives also was a key project goal. In all, the team addressed six bridges, replacing and constructing four new spans and rehabilitating two existing bridges.

Perhaps the biggest challenge in the project’s bridge component was the rehabilitation of the MLK Bridge on I-280, where the superstructure had deteriorated substantially. To minimize traffic disruptions, the team employed principles of a cutting-edge approach known as Accelerated Bridge Construction (ABC).

Consistent with ABC, the team prefabricated the main beams in pairs together with the deck off site, shipped them to the project area, hoisted them into place and secured them. The whole process occurred in remarkably short order.

“We installed the beams in each direction over two weekends,” reports Libin Yin, P.E., Michael Baker’s Technical Manager – Bridges. “In each case, we closed the bridge Friday at 10 PM and reopened it Monday at 5 AM.”

At another location and to salvage an existing full height bridge abutment, working from Michael Baker’s design, Harms removed the backwall and made the superstructure semi-integral with the substructure, allowing for the reduction of design loads and elimination of certain joints. That added an estimated 75 years to the life of that abutment.

For some local stakeholders, preserving Plume House was the most vital aspect of the project, and the Michael Baker-Harms team worked diligently to make that happen.

For the construction phase, the team installed a sophisticated vibrations monitoring system to ensure that the contractor’s operations produced no adverse effects on Plume House – or the brick-lined sewage system. Then, to buffer Plume House as much as possible once construction ended, the team strengthened the existing bridge pier footing next to Plume House with post-tensioning and pin piles to reduce any impact of vibrations.

Upadhyay observes that NJDOT, the Federal Highway Administration and the New Jersey Historic Preservation Office entered into a comprehensive Memorandum of Agreement for preservation of historic structures:

“We factored in vibration monitoring for the foundation at the Plume House since there were concerns raised by them regarding the structural integrity, and NJDOT was keen on supporting the request. I must say that the memorandum was very well managed and adhered to during the entire construction phase.”

Once the project was completed and traffic backups reduced, there were fewer cars idling and fewer exhaust fumes that could damage Plume House. The initiative created a healthier environment for the historic structure in several ways.

A SUCCESS BY EVERY STANDARD 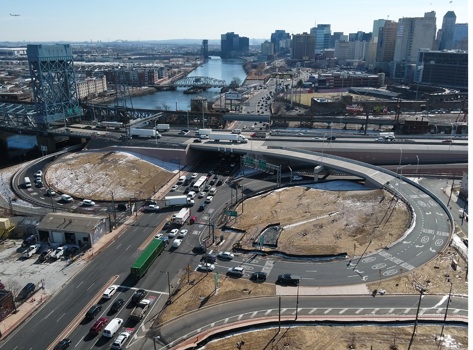 The benefits to motorists and the community were immediately apparent. The project enhanced capacity of the interchange while allowing traffic to flow more freely – and more safely. Protection for historically significant structures was strengthened. Grant and State streets now feature improved pedestrian access and resident parking; freeway ramps no longer deposit traffic there, making those streets far safer. As Sidani puts it:

“Within a very constrained site and footprint, we were able to meet the project goals of upgrading the interchange to current standards, to provide the missing moves, to improve mobility and traffic operations and to gain community trust by improving aesthetics while keeping traffic moving, with minimal impacts and disruptions – and without compromising safety. This defined our success story.”

Moreover, the Michael Baker-Harms team completed the initiative on time and shaved about $8.5 million from the estimated cost. The project was a remarkable success on all fronts, and the engineering/construction community took notice.

ENR New York named it the Best Highway/Bridge Project of 2019 while the American Society of Civil Engineers (ASCE) North Jersey Branch cited it as the 2019 Project of the Year. The American Council of Engineering Companies (ACEC) New York bestowed its Platinum Award on the project, and ROADS & BRIDGES magazine ranked it #7 in its national Top 10 Roads of 2019.

Perhaps the most important tribute came from the client.

“Overall, this remarkable infrastructure is very essential and helpful for the economic vitality of Newark businesses,” Upadhyay says. “It also has a positive effect on the quality of life and economic prosperity of city residents.” 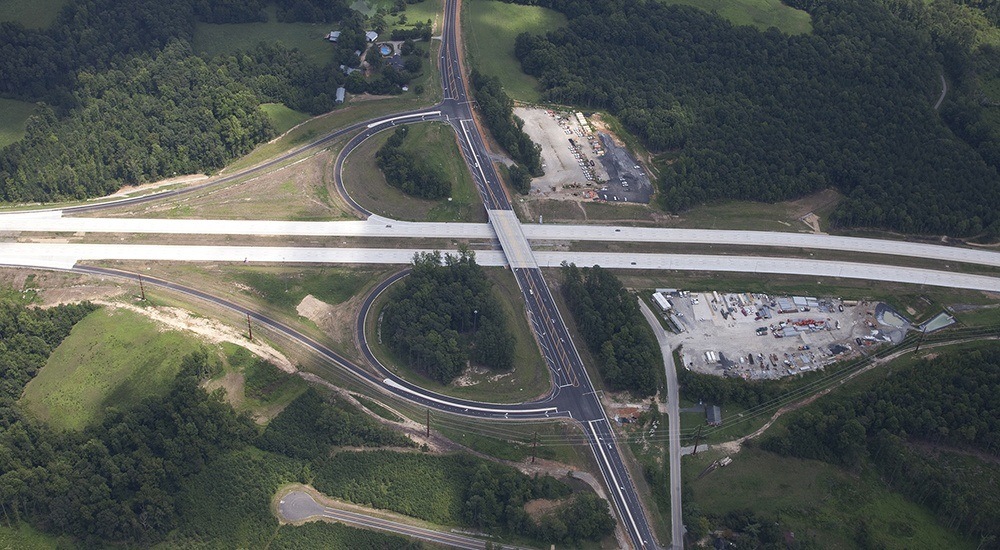 Jeff Clevenger, P.E., Senior Vice President and Director of Design-Build Delivery, shares what's happening in this innovation-driven approach to project delivery and how Michael Baker stands out for our collaborative style that delivers fresh thinking