Michael Baker recently marked a significant milestone for the aviation industry as it partnered with the Hartsfield-Jackson Atlanta International Airport (ATL) to use Unmanned Aerial Systems (UAS) to inspect runway conditions. ATL, known as the world’s busiest airport, serves more than 104 million passengers annually. This mission was the first of its kind to deploy UAS on the airfield of an international airport in the U.S. during daily operations.

To plan for the project, we obtained approval from the Federal Aviation Administration (FAA) to conduct UAS operations in Class B airspace at ATL.

Our team partnered with ATL on a pavement evaluation project and identified an opportunity for the innovative use of UAS to collect information on the condition of runway pavement. This method provided a large amount of data for the teams to analyze and helped to document the runway for future rehabilitation and improvement. It also presented time and cost savings for the airport as it took less than half the time to complete, compared to the traditional approach of manually photographing the physical condition of the runway, which can take more than four hours.

We used our Topcon Falcon 8 aircraft to conduct the drone flight to survey more than 3,000 linear feet of runway. The mission, conducted on Runway 9L/27R, was completed in less than 20 minutes, and produced approximately 630 photos of the airfield. This runway, the longest at the airport at 12,390 feet, typically carries the heaviest aircrafts, which causes the most pavement damage and safety concerns.

During this and future missions, we can generate contours, orthomosaic imagery, RGB 3D textured mesh and a digital terrain model. The data can then be analyzed by our experts and airport teams using engineering software such as Autodesk, ESRI and Bentley, and can help determine future needs to improve and maintain runway conditions.

“This was a great opportunity for our experts to assist the airport with a unique challenge. The information we gathered during this flight will give the airport valuable insight on the ongoing safety and maintenance of the airfield.” 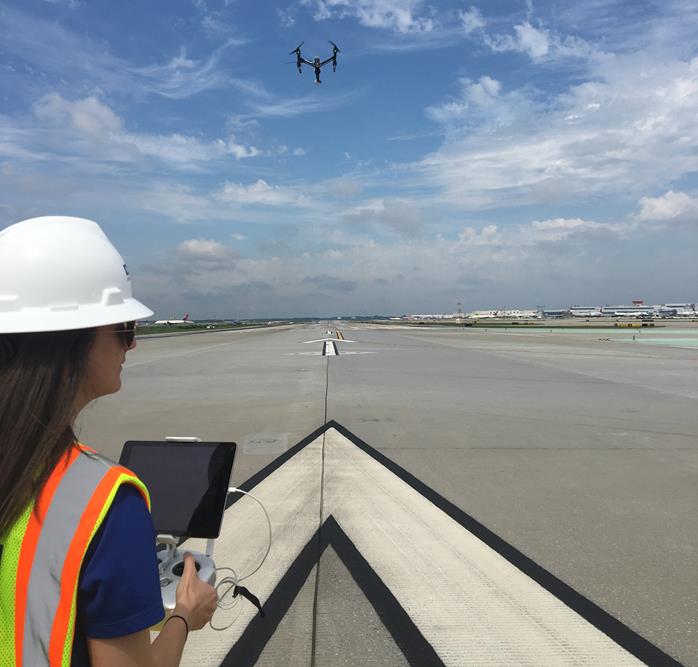