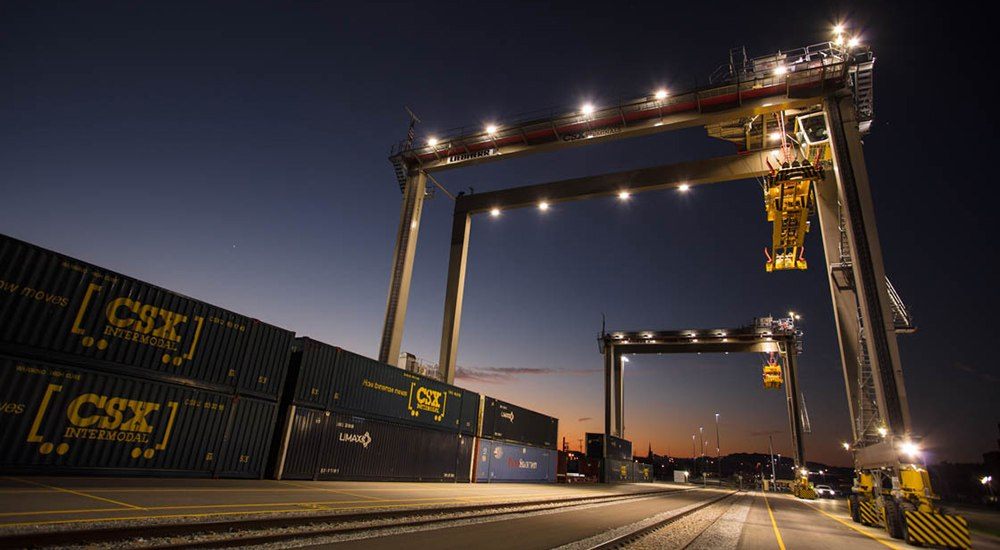 From the Fall 2017 issue of Signature

For 25 years, an old rail yard straddling McKees Rocks and Stowe Township, Pa., along the Ohio River just beyond Pittsburgh’s city limits, sat vacant, an overgrown reminder of the region’s once-thriving steel industry. The rail yard – located on a flat, industrialized edge of the borough known as The Bottoms, had served over the previous century as a rail interchange, locomotive rebuilding facility and rail maintenance shop for the former Pittsburgh and Lake Erie (P&LE) Railroad, which hauled coal, coke, steel and passengers. Until it didn’t. That was in 1992.

Twenty-five years later, you might hardly recognize this 70-acre site amidst what could be described as another remarkable riverfront transformation for the Pittsburgh region led by visionary business, civic and community leaders and Michael Baker International. That is, except for the site’s railroad tracks.

Today, the site – developed by railroad giant CSX into a state-of-the-art intermodal rail terminal as part of its $850 million National Gateway Initiative – stands as a testament to the resurgent freight transportation industry and the importance of moving raw materials and manufactured goods efficiently and cost-effectively across the country and around the world. But we’ll come back to that.

It also speaks to the opportunities ahead for Michael Baker to help engineer and manage the construction for such intermodal transformations – a notion for which Michael Baker has prepared well when it comes to amassing the right expertise and experience to take on these unique engineering and construction management challenges.

“Intermodal terminals are critical to the efficient movement of containerized freight and consumer goods,” says Tom Zagorski, practice lead, construction services for Michael Baker. “I like to call them inland ports. You get the same benefits, except there’s not a boat involved.”

U.S. freight railroads, projecting solid growth over the next 30 years, have been investing significantly in maintaining and modernizing rail infrastructure. According to the American Society of Civil Engineers, in its 2017 Infrastructure Report Card, the freight railroad industry in 2015 spent $27.1 billion on maintaining, growing and modernizing the railroad system. And the U.S. freight industry projects a 40 percent increase in shipments over the next 30 years.

Michael Baker’s involvement with rail yards and terminals began in 2006 with a small Ohio project – Gest Street Yard expansion in Cincinnati – for railroad giant Norfolk Southern Corp. This was an expansion of an existing intermodal terminal that enabled Michael Baker to build a foundation for rail yard and terminal design experience. The size of the projects and complexity grew, as did Michael Baker's collective experience and credibility.

“We designed access roadways, drainage, tracks, rail bridges, walls, tunnels, lighting and power and air systems, and we handled environmental permitting,” says Kirsten Bowen, a project manager in Michael Baker’s Cleveland office, of those earlier projects. “That enabled us to put our finger on the pulse of client needs.”

Here’s a look at four of these innovative projects – three completed, one in the pipeline:

CSX, based in Jacksonville, Fla., considers intermodal terminals so vital that it created the $850 million National Gateway Initiative, a public-private partnership, to develop an interconnected network of strategically located terminal sites and routes with double-stack clearance for intermodal trains, maximizing the ability to efficiently serve markets in the Midwest and mid-Atlantic corridors.

For the new Pittsburgh-area facility, which opened in September 2017, CSX acquired a vacant, 70-acre rail yard, located just west of Pittsburgh’s city limits along the river in Allegheny County, to support its hub-and-spoke approach to national intermodal freight transportation. Then it engaged Michael Baker to help develop its state-of-the-art terminal and serve as the owner’s representative in overseeing the construction of the project.

“CSX is committed to serving the growing needs of our current intermodal customers and others who can benefit from the speed and efficiency of intermodal service,” says Fredrik Eliasson, CSX executive vice president and chief sales and marketing officer. “Our newest facility in Pittsburgh will connect southwestern Pennsylvania to markets across the country and around the world.”

CSX describes the Pittsburgh facility, which required a $60 million investment by the rail company, as the “last key component” of CSX’s national initiative, a public-private partnership designed to create what the company describes as a highly efficient network of double-stack rail and intermodal terminals. By design, CSX notes, the network will connect East Coast markets to consumers, manufacturers and businesses in the Midwest.

Preparing the long-vacant industrial site in the Pittsburgh area, though, did pose its share of challenges for Michael Baker and its construction partners. As is the case with most brownfield sites, years of industrial operations can leave behind contaminants and old materials that require removal and mitigation measures. So the Michael Baker team worked to ensure the site was fully restored in a safe, environmentally friendly manner, navigating strict guidelines and preserving an important Stowe Township water line that runs through the site.

“The key to the success of the project,” says Giuseppe Mammana, project manager for Michael Baker in Pittsburgh, “was working closely with the owner and the construction team members and being able to roll up our sleeves and work side by side with the team."

“To witness the amazing transformation from a vacant, overgrown rail yard to this clean, high-tech intermodal facility has been a fulfilling experience,” says Adam Walkowiak, on-site construction engineer from Michael Baker’s Pittsburgh office. “Even more rewarding now is seeing the final completion of the project and knowing the positive impact it will have on this community.”

Says Allegheny County Executive Rich Fitzgerald: “The terminal will not only help connect Western Pennsylvania’s businesses to the global marketplace, it also will help stimulate McKees Rocks’ and Stowe’s economies."

PUTTING SHIPPERS CLOSER TO THEIR MARKETS

Norfolk Southern, based in Norfolk, Va., meanwhile has established, with help from Michael Baker and others, an East Coast artery it calls the Crescent Corridor, a 2,500- mile grid of rail and intermodal terminals that facilitates shipping, diverts long-haul trucks from roadways and sparks local economic development across 11 states, spanning Louisiana to New Jersey.

“Norfolk Southern has invested in the Crescent Corridor to provide customers with a fast, direct route between the Southeast and the Northeast while offering a range of truck-competitive shipping options that include connections to the West Coast and Mexico,” says Christine Traubel, assistant vice president, intermodal and automotive, for Norfolk Southern. “The intermodal facilities we’ve developed on the corridor have created additional freight capacity, improved transit times, and put shippers closer to their markets, which helps reduce their overall supply-chain costs.”

As part of the $2.5 billion public-private partnership, Norfolk Southern has introduced four new intermodal facilities along the Crescent Corridor, including in Birmingham, Ala.; Memphis, Tenn.; Charlotte, N.C.; and Greencastle, Pa., near Pennsylvania’s capital of Harrisburg. Michael Baker provided engineering and construction management services for the Greencastle facility.

“We were connecting with the local water and sewer systems and affecting local roadways,” says Will Snyder, a project manager for Michael Baker who managed the project. “We met regularly with the township to discuss these matters.”