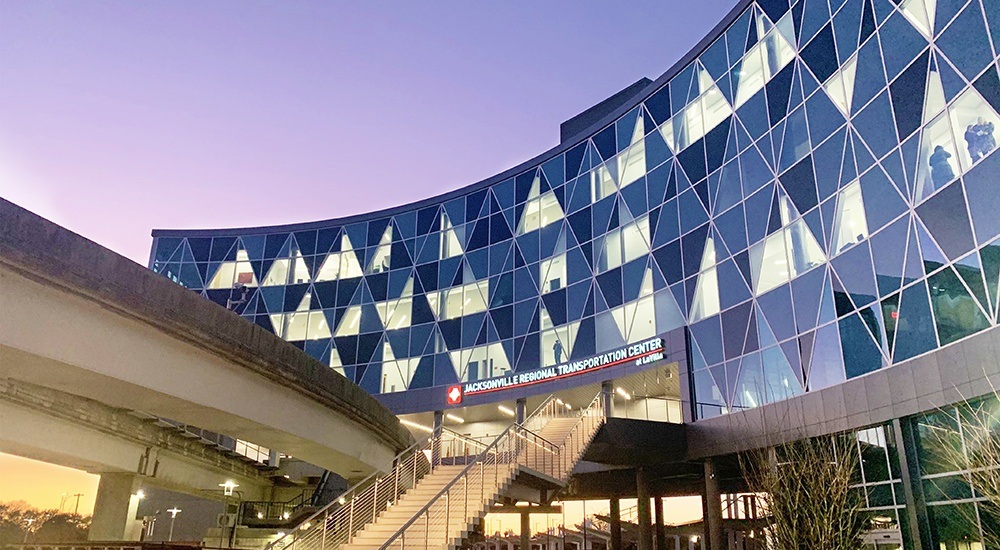 From the Summer 2021 issue of Signature

The Jacksonville Regional Transportation Center at LaVilla (JRTC) is a marvel. With its unique crescent shape and signature glass curtain wall, it serves as a beacon for local travelers as well as tourists, offering efficient, smooth journeys to and from downtown Jacksonville and to nearby interstate highways. It also serves as an economic generator for Jacksonville’s LaVilla neighborhood, which now is linked to JRTC through exciting new connections.

And it all began in the most unusual way ... with a design competition.

AN OPPORTUNITY FOR SOMETHING COOL

The Jacksonville Transportation Authority (JTA) envisioned the new transit hub happening in two phases. First would be development of a bus terminal offering a wide array of traveler amenities; Michael Baker International provided design services for that successful first phase. But for the all-important $60 million second stage, JTA imagined something quite different.

“We wanted to build a sustainable facility that was modern, yet familiar in its design and functionality,” says JTA Chief Executive Officer Nathaniel P. Ford, Sr. “Inside, we wanted a lot of natural light, an open office concept and to emphasize that important sense of place for our employees. I believe the design competition inspired another level of ingenuity that was not possible before.”

It was a bold, unconventional, even risky approach, but it was an opportunity to create something meaningful for the client and community that intrigued Michael Baker’s designers and engineers.

Those who ultimately would lead the project team — Michael Baker’s Brian Russell, P.E., Office Executive in the Jacksonville office, and David Tudryn, R.A., AIA, Specialty Practice Leader for Architecture — had never participated in a design competition during their time at Michael Baker.

“At Michael Baker, we always challenge each other to take risks and go after rewarding projects,” Russell says. “This gave us an opportunity to do something bigger than what we can achieve alone as one office — and have fun doing it.”

The company decided to participate in the competition — there were two other contestants — forming a joint venture with construction firm Pond & Company and tapping the expertise and resources of 10 different Michael Baker offices to work on the submission.

“We went all-in for the project,” Tudryn confirms. “We recognized its importance and the legacy we could build.”

The far-flung group even convened what in architecture grad school they call a “charette,” a freewheeling creative session where participants brainstorm and throw ideas against the wall to see which will stick. Most of them, Tudryn says, did.

“What you see in those initial concept sketches was maintained throughout the project,” he says.

The Michael Baker-Pond joint venture prevailed, and they were determined to design a scintillating Jacksonville landmark that would become a model of transportation efficiency, signature aesthetics and community-serving features.

First and foremost, the JRTC is a nexus of efficient intra-city transportation. The facility forms a crescent-shaped terminus to the Skyway line and locates pick-up and drop-off points for ground transportation, as well as intercity lines such as Greyhound, with accommodations for taxis, rental cars, bicycles and ride-hailing services. With an eye to the future, the JRTC also allocates space that can be converted for use by autonomous vehicles.

For all these conveyances, traffic flow is seamless, as the Michael Baker design features traffic moving on a series of dedicated loops. In this way, congestion and delays are minimized, shortening trips for travelers. Above the transit center circulation, Michael Baker-Pond designed and constructed a 67,000-square-foot headquarters for JTA that has enabled the Authority to centralize its functions on site and enjoy a bird’s eye view of what’s happening at the center at any given moment.

The JRTC also has improved safety for bus riders, who formerly had to trek across heavily trafficked bus lanes to transfer. That’s all changed now, as Tudryn notes: “A passenger transferring from one bus to another has only to cross down the center island. That makes it much safer.”

“The safety and well-being of our customers and employees is paramount in all that we do,” adds Ford. “The Michael Baker-Pond team understood that from the start and integrated safety and security in the fabric of this facility.”

The facility is as stunning as it is efficient, inviting travelers with a unique glass curtainwall with a captivating abstract motif that presented a design challenge: how to create the dozens of glass panels that would form the curtainwall.

To meet that challenge, the joint venture worked with a local glazing manufacturer to create a striking interlocking design of triangular shapes digitally printed on the glass with two alternating colors. Then, the panels were assembled in a factory and inserted like puzzle pieces on the façade in a manner that forms a pattern — both during the day and at night — which appears to accelerate as it approaches the Skyway boarding area.

“We wanted something that would advocate for activity, movement and transportation,” Tudryn says, “so we looked for a graphic that could express that.” Inside the building, that same pattern is expressed with alternating solid components to properly insulate the walls and meet the energy code. This gives JTA staff strategic views of the Jacksonville skyline and the transit operations below, while not overpowering the interior with the Florida sun.

CONNECTIONS AND AN ECONOMIC BOOST FOR LAVILLA

Among the most important and lasting benefits of the JRTC has been its impact on its host community. Long regarded as an important center for African-American culture and commerce, LaVilla in recent years has seen its economic activity decline. The commitment by JTA to bring the intermodal center to LaVilla greatly improves community access to the greater Jacksonville area for jobs while offering it as a convenient destination for future arts and entertainment venues, as well as the adjacent convention center.

In addition, the JRTC includes spaces for community events and gatherings — an unusual amenity for a transit complex, but one that’s perfect for use by LaVilla residents and organizations — as well as murals that celebrate LaVilla’s rich history. The center also offers space for retail businesses that will offer community-serving products and services for LaVilla.

Tudryn observes that all this may help invigorate LaVilla’s economy.

“We anticipate it’ll become a catalyst to reinvigorate this once-multicultural district that dates as far back as the late 19th century,” he says.

“Other adjacent and underutilized parcels in the neighborhood can be developed for mixed use and civic use.” To further improve safe access to transit, Michael Baker-Pond designed and constructed an inviting pedestrian bridge that links JRTC to the Intercity Bus Terminal and unifies the campus. The bridge, which spans 280 feet over LaVilla’s Stuart Street and West Forsyth Street, features a canopy with a design that extends the language of the triangulated curtainwall. The bridge serves as a new gateway to downtown Jacksonville for passenger cars exiting I-95.

Today, the JRTC is bustling, serving about 18,500 people per day. With its acceleration-themed curtainwall, inviting pedestrian bridge and efficient traffic flow, it’s a wonder — and a major convenience — to all who see and use it. Tudryn doesn’t hesitate to include it among the country’s signature transit hubs.

“We’ve created something iconic,” he says. “It puts Jacksonville and the transit agency on the map along with Grand Central Station and other iconic transportation centers. I’m really proud to be part of that.”

Russell echoes that thought: “For me, the most important outcome was delivering a facility that the city is proud of. This site has been thoroughly scrutinized, and it’s generated nothing but positive feedback.”

Prominent among those glowing reviews is recognition by the professional community. The American Council of Engineering Companies of Florida (ACEC-FL) honored JRTC and Michael Baker-Pond with the prestigious Grand Award in its Engineering Excellence Award competition, which recognizes innovative applications and elaborate projects. In addition, the initiative won the Engineering News-Record (ENR) Southeast Regional Best Projects 2020 Merit Award, while Associated Builders and Contractors (ABC) Florida First Coast Chapter named it Project of the Year.

“Today, the JRTC serves as a catalyst for economic development, a hub for culture and innovation and the convergence of mass transportation in our city,” says Ford. “It’s built for the future and will serve customers for generations to come, as our services expand and demand grows for the vital public transportation services we provide.”

And it began as a design competition? Sounds like efficiency, beauty and community impact are a winning combination. 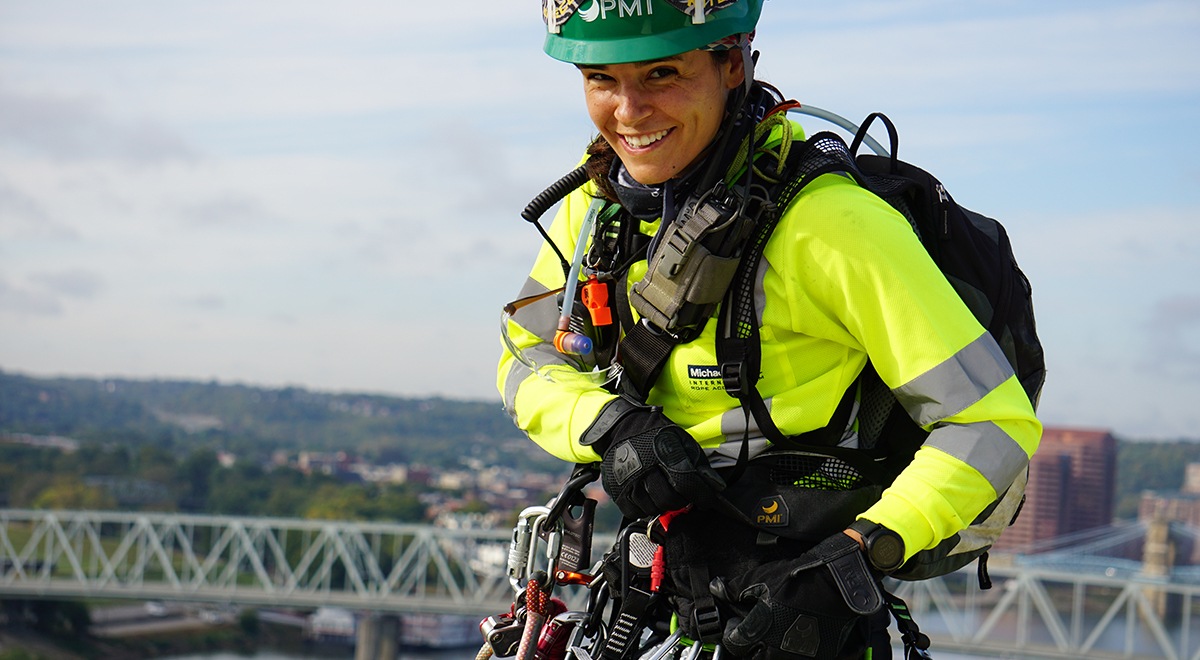 Krista Stippelmans Harnesses the Potential of Women in Rope Access

Kirsta Stippelmans is breaking down barriers for women in the rope access community. 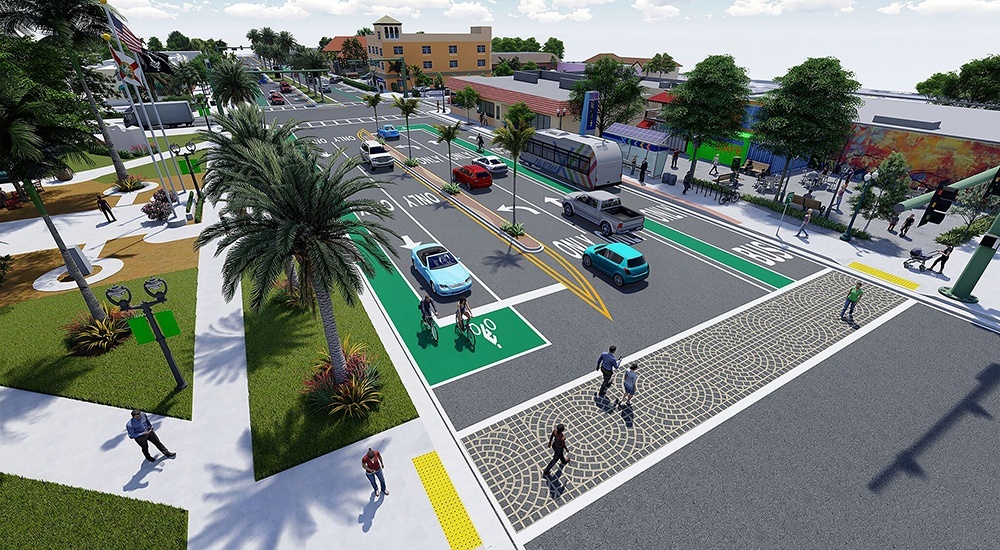 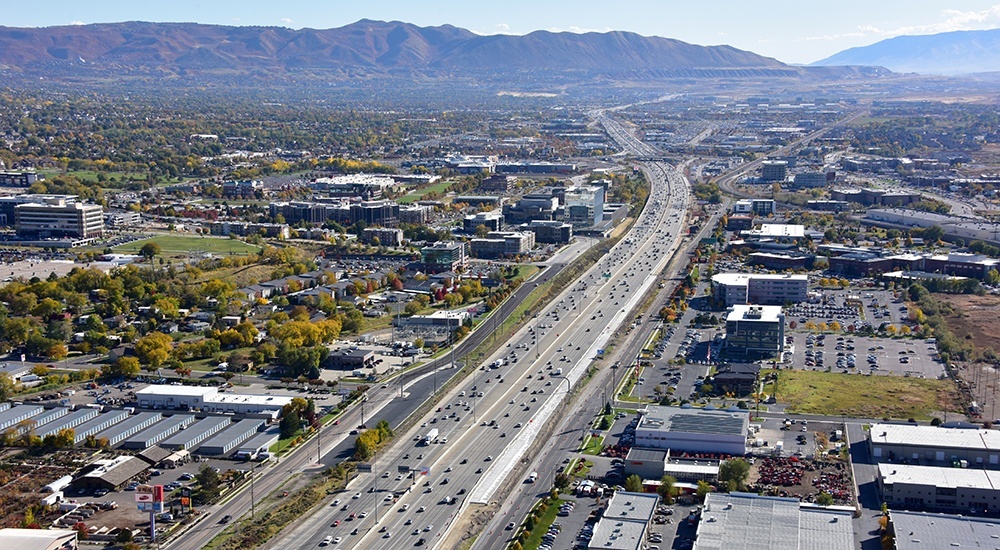