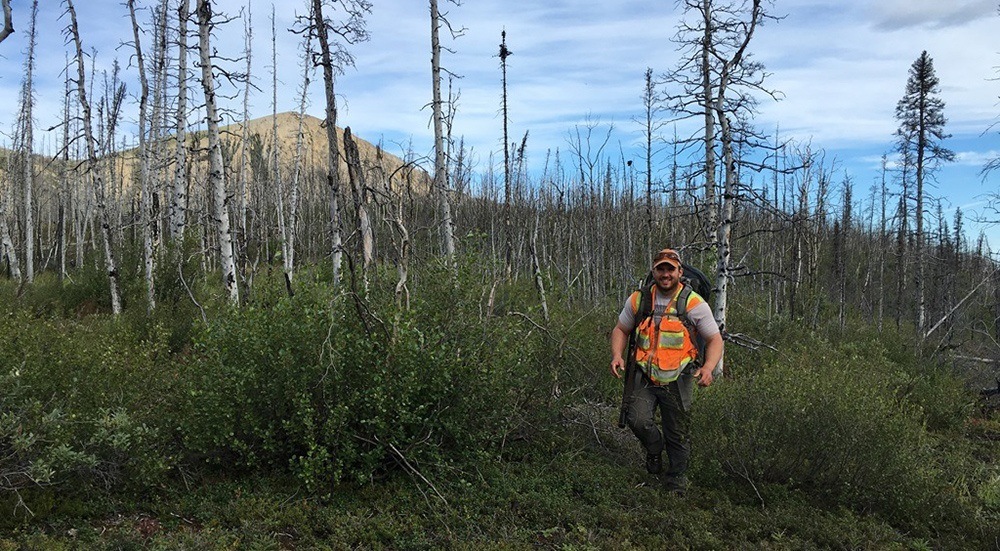 Donlin Gold. Sounds almost like a mythical Alaskan treasure hunt, with its vast known gold deposits, serious long-term investment – and formidable infrastructure challenges in getting people, equipment and supplies to this massive modern-day gold mining project in the mountainous heart of Alaska’s remote southwestern bush country. Then there’s the permitting process for more than 100 local, state and federal government permits required to develop the mine site.

Unquestionably, this would prove daunting to those working with Donlin Gold, LLC, to help develop an enterprise that one day is expected to extract more than 33 million ounces of gold. But for mine engineering veteran Victor Ross and his rugged team of environmental scientists, biologists and engineers from Michael Baker International, such challenges didn’t stop them from taking on Alaska’s unforgiving weather, wildlife and wetlands to map and study upwards of 100,000 acres for the gold mining company to more accurately delineate wetlands from uplands in preparation for environmental impact permitting.

That is, of course, unless team members encountered wildfires. Or bears.

“If a bear shows up, our protocol is to carefully exit stage-left,” says Ross, project manager for the mapping and study, which his team completed in 2016 over a 42-day period living out of remote ‘lodges.’ “We do yearly bear safety training with our teams. If we have bears in the area, the crew determines an exit strategy, contacts the helicopter pilot [via satellite phone or radio], and the crew moves on to the next landing zone. They’ve never had to dispatch a bear, but they have had to back away.” Same goes for wildfires caused by lightning strikes, Ross says, noting that his team has had to avoid certain mapping areas to avoid smoke and flames.

Ross says Donlin Gold, LLC, hired Michael Baker last year to re-analyze the 100,000-acre study area after the U.S. Army Corps of Engineers (USACE) changed its manual requirements from requiring a “mosaic” approach to wetlands study to allowing an “absolute line” approach. Ross explains that, with the mosaic approach, which mathematically measures wetlands, analysis would focus on units of land. USACE determined that, if even 10 percent of the land within the unit were deemed wetland, the entire area was considered a wetland.

Consequently, the original wetland analysis, based on the 1987 USACE manual, identified 9,000 acres of wetlands that would impact the mine, transportation corridor, and a 315-mile pipeline to bring natural gas to the mine site to power the processing mill. As a result, the gold mining company would have been required, as part of the USACE permitting process, to devise costly restoration solutions to mitigate wetland losses; purchase wetland mitigation bank credits from other companies; or pay “In-lieu fee credits” to compensate for the wetland losses tied to the 9,000 acres.

Ross’s team, a group of 10 scientists and engineers, flew into remote locations in teams of two via a small helicopter, working with USACE to approve new mapping protocols using existing aerial maps, LiDAR, GPS and a boots-on-the-ground delineation study. The team completed gap analyses to determine ground targets and then completely remapped 100,000 acres for Donlin Gold.

The result: The more accurate mapping “reduced the actual wetlands impact by more than 4,000 acres,” says Ross, who retired from the USACE a little more than four years ago and joined Michael Baker in Anchorage. “That’s a huge number. It’s a monumental step to go from 9,000 acres to less than 5,000. Now the client, with defined wetland boundaries, can further adjust access roads, material sites, pipe storage yards, etc., within the pipeline corridor. The mine footprint also has been reviewed to adjust access roads and facilities that now have further flexibility to move around the mapped wetlands.”

The reduction in wetland delineation will allow Donlin Gold to reduce its wetland impacts and therefore its compensatory mitigation costs.

So what’s next for Michael Baker and Donlin Gold? Michael Baker is continuing to help with the permitting process, which is expected to take several years, as well as infrastructure efforts, including refinement of the route of the buried 14-inch pipeline, which will carry natural gas across the wilderness to the remote site to power the processing mill.

Once up and running, Donlin Gold expects to remove an overall average of 1.3 million ounces of gold annually from the open-pit mine over more than 27 years and employ more than 1,400.

“Nothing about this project is simple,” Ross says. “I’ve been working on this project for 20 years. It has been one complicated project.”