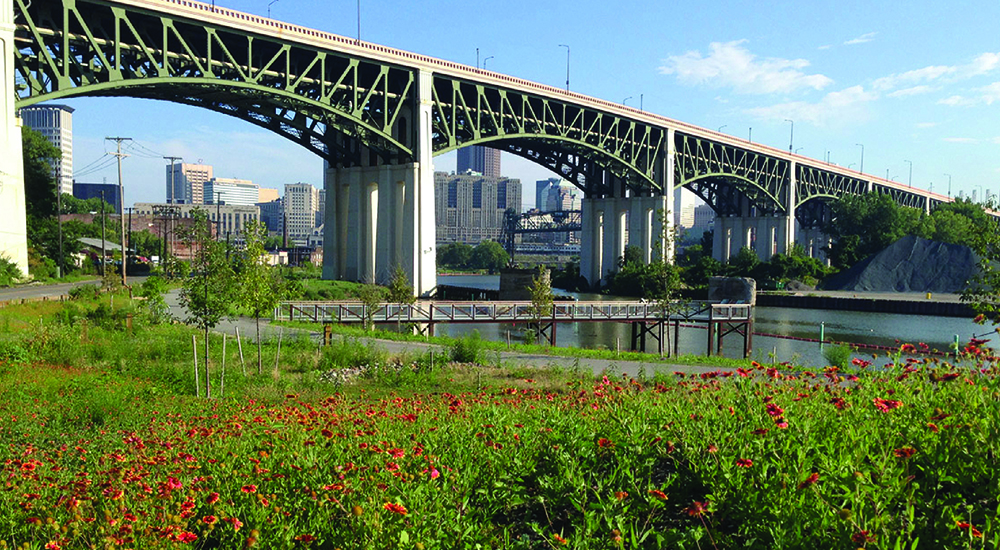 From the Spring 2017 issue of Signature

Between the shores of Lake Erie and the Cuyahoga River in Cleveland, a stretch of aging, under-utilized industrial land and an old shipping channel lined with metal plates – armor – wound their way unremarkably south around this northeast Ohio city. The river and shoreline, framed by an impressive city skyline and an iconic steel vertical-lift drawbridge, meandered slowly past neglected red-brick warehouses, rail yards and overgrown vacant lots. It flowed almost unnoticed beneath several highway overpasses, paying a sort of homage to the region’s once-thriving rustbelt heyday but offering little in the way of fish habitat, recreation, education – or nature – on its way through the city.

It offered much potential, though, according to a diverse consortium of economic development agencies, city planners, developers and environmental organizations. A potential, they concluded, to rethink, reshape and rebuild that urban river corridor into something purposeful, aesthetically beautiful, educational, restorative and sustainable socially, economically and environmentally. And that’s just what this group has done, with design and engineering guidance from Michael Baker International.

They called the multi-phase restoration project the Cuyahoga River AOC Restoration (AOC stands for “Area of Concern,” an official governmental designation). A team of Michael Baker engineers, designers and scientists from the firm’s Cleveland office served as the lead contractor for this multimillion-dollar, long-range sustainability effort that already has proven popular and a welcome improvement to the waterfront in Cleveland.

“The stakeholders are extremely pleased with the completed project, which was opened to the public this past summer,” cited a letter from the Cuyahoga County Department of Public Works, in nominating Michael Baker for a national award based on this project. “[Michael] Baker’s ability to manage this context-sensitive design project, coupled with complex coordination of the multiple stakeholders, was exceptional.”

The project has focused on the armored and dredged ship channel in the lower 5.5 miles of the Cuyahoga River, which connects Lake Erie to the natural river upstream. Armored plating and vertical bulkhead line virtually the entire shoreline of the ship channel to allow 650-foot freighters adequate shore-to-shore navigation space through the channel.

The project’s stakeholders had realized over time that, while accommodating to large cargo vessels, the ship channel had become a source of impairment to the Cuyahoga River and the Cleveland area because of the river’s dredged depth, slow flow, armored shoreline and the absence of a functional riparian edge. From a purely environmental perspective, the channel created a difficult habitat especially for fish, which migrate annually from Lake Erie through the channel, on their way to upstream spawning beds.

The project, according to Jeff Broadwater, manager of Michael Baker’s highway and bridge engineering practice in Cleveland, encompassed the restoration of 3,000 linear feet of fish habitat within the ship channel, while also transforming two adjoining properties – 11 acres that had served local industry as a rail yard and coal storage area – into a restored native habitat and park. With that restoration complete, the AOC Restoration group then added a new mile-long, shoreline Towpath Trail that would traverse through the new habitat, as well as visitor facilities, educational exhibits and other amenities.

“As the project has advanced, it also has served as a catalyst to stakeholders to move design forward for the remaining Towpath Trail projects, creating excitement among the stakeholders and public to find ways to overcome any new challenges associated with the trail projects in the urban environment,” says Broadwater, who led the Michael Baker effort. “We saw this, as the various groups involved in this project helped with grant applications and securing additional funding to complete the trail.”

THE IMPORTANCE OF STAKEHOLDER BUY-IN

This project, with all of its layers of complexity, represents a multi-agency collaboration involving a wide and disparate number of organizations. Among them: The City of Cleveland, Cuyahoga County Department of Public Works, Cleveland Metroparks and Canalway Partners. All entered into a project development agreement with defined responsibilities to construct the remaining six miles of Towpath Trail in the City of Cleveland as part of a 100-mile-plus trail system called the National Heritage Corridor Ohio and Erie Canal Towpath Trail. The formal agreement helped cement stakeholder buy-in of this long-term sustainability initiative and secure funding to advance the construction.

The agreement also helped the group move its project plans forward in light of the goals of other regional organizations, which coincided with this group’s.

A MORE FISH- AND VISITOR-FRIENDLY SHORELINE

One of the outcomes of the project was to modify existing riverbanks to support fish habitat. That meant adjustments to the shoreline, which is lined with vertical metal plates or bulkheads along most of the river in the ship channel. To accomplish this, Michael Baker’s plans called for underwater inspection and assessment of the bulkheads, whose conditions varied wildly, from good to failed. Bulkhead replacement would prove extremely expensive – estimated at $3,000 per foot, multiplied by close to 3,000 feet of shoreline in question. Replacement of the existing bulkhead became a major cost concern for the restoration group.

In response to this challenge, the Michael Baker team developed a holistic site renovation approach to site development, given sheeting and bulkhead conditions. Failed sheeting or wooden bulkheads were removed, retrofitted or abandoned where the shoreline could be pushed back, with slopes to create more natural riverbanks. This approach also included allowing for river enthusiasts closer access to the channel for fishing or viewing freight vessels in areas of good, intact sheeting. The Michael Baker team also worked with stakeholders to develop a rehabilitation plan for the deteriorating sheeting to both extend the life of the sheeting and improve the fish habitat.

The project also included the acquisition of vacant post-industrial and commercial property, along with environmental cleanup of contaminated soils on the site and site restoration, planting of native species of trees and other plants, and construction of a trail and river overlook. This overlook has proven one of the most popular elements of the project, providing visitors with free access via the new trail to observe the juxtaposition of the working river, industrial activity, city skyline and natural habitat.

The new development extends the Towpath Trail, a 100-mile-plus national heritage corridor, into downtown Cleveland. It also expands the footprint of Cleveland Metroparks, one of greater Cleveland’s most revered public assets, into the inner city. Metroparks also has developed educational programs around the trail system for school kids to experience nature within the city, further enhancing the trail’s value as a long-term educational resource and source of community outreach.

“The catalyst for those adjacent trail projects to provide enhanced connectivity has been the Cleveland Foundation’s Centennial Trail, which was constructed by Cleveland Metroparks,” says Michael Baker’s Broadwater. “They also have served as a catalyst for reconstruction of the adjacent Scranton and Carter Roads, long-neglected roads in poor condition. Even though connectivity to the Towpath Trail, as well as nearby residences, has yet to be fully established, the trail has seen regular use by joggers, walkers and bird watchers.”

ENVIRONMENTAL REBIRTH IN THE CITY

The comprehensive environmental cleanup of contaminated soils and overall restoration of this site to a natural state clearly has improved habitat for fish and birds in the Cuyahoga River ship channel. Michael Baker’s plan called for construction of four fish habitat zones and six bio-retention cells to provide not only improved fish habitat, but also to assist in more sustainable stormwater management.

The design included a segregated area for fish, located away from public access, to ensure more successful fish migration and spawning. It also called for the installation of a floating boom to keep out debris and reduce artifcial lighting, which minimizes light pollution.

As the project partners complete each phase of the revitalized area, Cleveland Metroparks has assumed maintenance responsibilities, including the planting of supplemental and replacement plantings of native trees, shrubs and flowers along the riverbank, as well as management of the fish habitat.

“It has been so refreshing to attend meetings where the people are excited about a project and can’t wait to see construction start,” says Doug Blank, an engineer with Michael Baker’s Towpath Trail team. “All through this project, we’ve had excited stakeholders and residents. As we were building a big park, people who weren’t aware of what was going on may have thought we were putting in apartments or something, but since people started to see the entire trail come together, the response has been great.”

Even greater, Blank adds, is the fact that, as the project moves forward, more parts of the trail will come together into a larger network of nature trails.

“It just builds more excitement,” Blank says. “All of the connections are scheduled to be made by 2020. This new habitat and Towpath Trail encourage people to get out and about. It’s amazing to see how many people come down there now. What a great feeling for a designer to see the benefits of their work.”