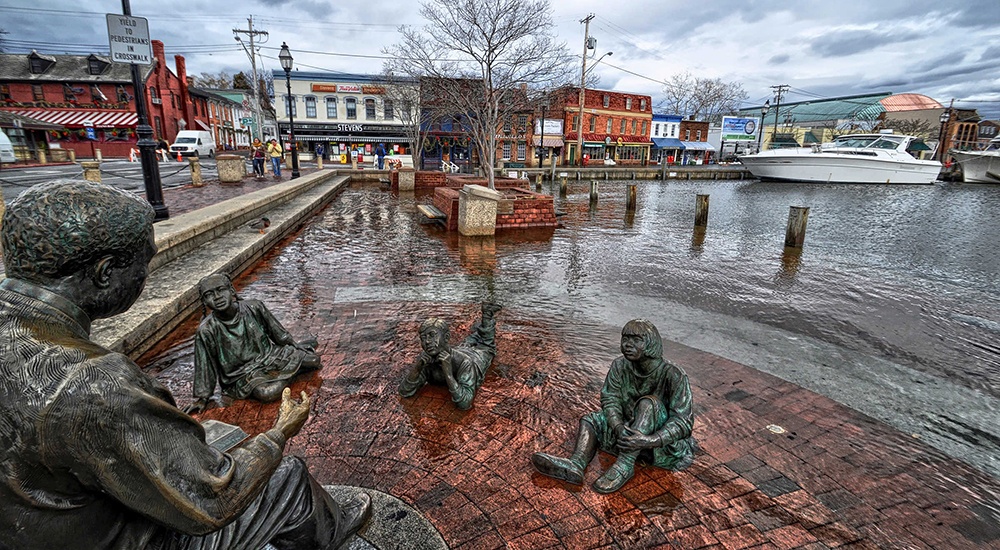 Annapolis is an old seaport city offering great charm, cultural diversity and historical significance, with many structures that date to America’s colonial period. As the capital of Maryland, it also serves as a hub of government and politics. At the same time, it is home to the United States Naval Academy and plays a key role in the country’s military defense.

Annapolis is also known for something it would rather forget – flooding. As a low-lying coastal town – the lowest-lying sections include downtown Annapolis – the city remains vulnerable to flooding all around: tidal flooding from Chesapeake Bay; flooding triggered by coastal storms; flooding produced by climate-change-related sea-level rise; and, ultimately “urban flooding” caused by a surge of floodwaters inundating sanitary sewers.

Flooding in Annapolis has proven more than an inconvenience. It has become a major disruption to, and financial burden for, local businesses and residences, as well as a deterrent to the vital tourism sector there. Perhaps worse, flooding has imperiled the town’s many priceless cultural artifacts.

Well aware of this dubious distinction, Annapolis actively has pursued ways to both educate the public about its escalating flooding issues and minimize future flood impact. And that is where Michael Baker International and its team of innovative planners, GIS experts, environmental engineers and others have become a key part of the story.

By deploying a unique, technology-driven solution developed for the city by Michael Baker, the firm and the city have taken control of the flooding story to potentially change the narrative for future generations.

Flooding incidents in Annapolis have risen significantly in recent years. Over the past 50 years, tidal flooding alone in Annapolis has risen from an average of four “nuisance” flood days per year to nearly 40, according to statistics compiled by the National Oceanic and Atmospheric Administration (NOAA). The federal agency reports that Annapolis has experienced a 925 percent increase in average annual nuisance flooding events over those five decades – the greatest increase recorded for any U.S. city.

Embracing those facts, the city of Annapolis launched a large, multifaceted, community-based planning initiative called “Weather It Together: Protect Our Historic Seaport” to help residents better understand and adapt to the risks associated with flooding. At the same time, city planners developed both a Natural Hazard Mitigation Plan and a Cultural Resources Hazard Adaptation and Mitigation Plan. These documents served as the foundation of the city’s efforts to educate and mitigate. The challenge, though: How could the city bring the initiative, including those documents, to life in a way that would prove engaging, comprehensive and relevant to so many different stakeholder groups in the region, from government agencies, businesses and residents to preservationists, historical societies and environmental groups?

The Michael Baker team approached the city with an innovative idea that had been percolating among the firm’s planning practice for some time. What if the team could collaborate with the city and other partners to help it create a new geospatial-based, interactive, online story-mapping tool that would take stakeholders there on a unique, compelling journey that introduces them to the city’s flooding issues while also including many colorful, informative and relevant side trips?

Moreover, what if the user experience also would allow visitors to add their own flooding experiences and pictures to make the story continually more dynamic and personal?

“The idea was to volunteer our time to enhance our impact in the community,” says Bradley Dean, CFM, CE, coastal scientist in Michael Baker’s Alexandria, Va., office who headed the Annapolis project. “In terms of business development, we thought it would show our leading-edge capabilities to potential future clients.”

The story-mapping idea arose early in 2017 when Michael Baker’s planning practice launched what it called the Michael Baker International Planning Innovation Lab, which was created to encourage the development of new ideas among team members. Planners from across the company submitted ideas for commercial consideration following a call for ideas, including Dean and his story-mapping innovation. The Planning Lab chose to accelerate Dean’s idea.

Dean, with help from the Planning Innovation Lab, a modest investment from Michael Baker, and a team of collaborating coworkers, began developing an advanced story-mapping tool built on an ArcGIS platform that would help clients meet a variety of story-mapping challenges.

Among the ArcGIS platform’s many advantages, Dean explains, were that the cloud-based, open-ended platform supports numerous computer software applications and does not require desktop software. Michael Baker’s goal was to develop a working prototype in partnership with a select client and showcase the new tool, at no cost to the client, to promote the capabilities of the tool, as well as the thought leadership of Michael Baker, particularly in the planning practice.

So Dean and his team, aware of Annapolis’ flood education and mitigation challenges, approached several key Annapolis leaders with the development proposition. Dean recalls that all present in those meetings had discovered a mutuality of interest and agreed to work together on a prototype.

“We said we want to advance our knowledge and advance their knowledge,” Dean says of initial discussions last year with Annapolis city officials. “It could be a mutually beneficial opportunity. It is a great marketing piece for us and has great benefits for the city. It was one of those star-aligning moments.”

Lisa Craig, chief of historic preservation within the Annapolis Office of Planning and Zoning at the time, had much the same reaction.

“Michael Baker was icing on the cake,” she says. “It gave us the opportunity to showcase the information we had collected to date – all the databases, all the community surveys and responses – and communicate the issue in a much more dynamic and interactive way than a 200-page report. It was the best example of how public-private partnerships can work without legal agreements but with a handshake.”

Dean and his team debuted the story-mapping tool with Annapolis later in 2017, and already its popularity as a flood-awareness tool has allowed the team to introduce the concept to other coastal cities where a flooding-awareness tool could prove beneficial.

SHARING A BODY OF FLOOD KNOWLEDGE

The completed story map is known formally as “Landmark At Risk: Protecting the Historic Seaport of Annapolis, Maryland.” Anyone with Internet access can view the site, which features photos that depict flooding in the region and its effects on residences, businesses, historic structures and cultural treasures. Visitors to the site also can click through many interesting sidebars – and create some of their own as they relate to the flooding.

The statistically inclined, for example, can browse a number of NOAA reports on sea-level rise. Others will enjoy the written and pictorial history of Annapolis, which highlights everything from the 1845 founding of the naval academy to the 1867 “arrival” of Kunta Kinte, the patriarch from Alex Haley’s celebrated novel “Roots.”

“It is more than just an awareness tool,” Dean says. “That is the primary focus, but it is meant to engage stakeholders as well.”

When “Landmark At Risk” was introduced at the second annual national Keeping History Above Water conference, which Annapolis hosted, participants were so taken by the story map that some added their own photos.

Craig notes that while long-term local residents may be quite familiar with their city’s flooding woes, the audience for the story map is ever-changing and ever-expanding.

“Business owners change,” she notes. “People move in and out. Visitors do not understand why the downtown floods 45 to 50 days every year. There is a need to constantly be informed as to what the issues are.”

“You can access it at a very high level of policy and strategy, and you can dig down into the details,” Kennedy says. “It is actionable and digestible. That is critical when you are trying to move a community forward. We are talking about how we can protect Annapolis from flooding 100 years from now. That is a really big question to ask.

“The story map allows people to dip in and dip out of the conversation to get information that will inform the debate,” Kennedy continues. “It is really important to have a shared body of knowledge which the whole community can access.”

A MODEL FOR OTHER COASTAL COMMUNITIES

Although Michael Baker’s innovative story-mapping-based flood-awareness tool is new, it already has attracted considerable attention, including more than 4,200 views immediately following its debut. The city of Annapolis was so pleased with the results of the new tool that it presented an award to Michael Baker for what Shawn Wampler, GIS coordinator for Annapolis, calls “much-needed guidance and expertise."

“As a GIS professional, it is very easy to become focused on the data and overlook how to best communicate the information to the public or other city staff,” Wampler says. “GIS data often can be complicated, misunderstood and misused. Since the city has been working on the Weather It Together project for so long, determining how to showcase and present it was a very daunting task. The amount of information that has been collected and analyzed is massive.”

Because Annapolis boasts such a rich but vulnerable treasure trove of period structures, architects also have taken particular interest in the story map, so much so that the American Institute of Architects invited Michael Baker recently to discuss the project at one of the organization’s professional conferences.

“The story map has brought a lot of national recognition to Annapolis and to us,” Dean notes. “They are seen as a leader in resilience and, specifically, in the protection and preservation of architectural resources. The amount of Annapolis’ buildings that date back centuries is really a big piece of this.”

Moreover, the story map soon may serve as a model educational and awareness vehicle for other coastal communities. Craig left her position with Annapolis recently to join Michael Baker as director of resilience, focusing on hazard mitigation, flood risk and historic preservation.

“I am taking the template that has been developed for addressing climate change in low-lying communities and rolling it out to others who have shown an interest in this type of tool,” Craig says. “There are more than just water issues involved. We are really talking about the hazards associated with climate change.”