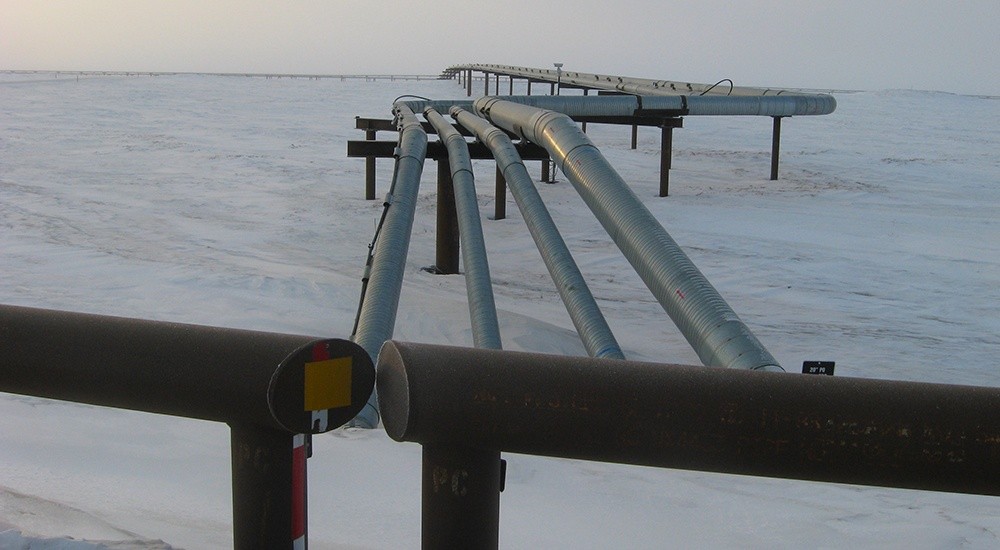 Tales of the Tundra

From the Spring 2017 issue of Signature

Created in 1923, the National Petroleum Reserve-Alaska (NPR-A) was designed to provide a secure supply of oil for America. The 23-million-acre, Indiana-sized tract boasts an estimated 900 million barrels of oil, much of it located under federally owned property but some situated beneath land owned by Alaska’s Inupiaq people. Given help from Michael Baker International, completed construction of the the volatility of oil supply and prices, NPR-A seemed like a good hedge for America.

That hedge became a reality in 2015 when ConocoPhillips Alaska, with CD5 development and sent the project's first oil, through several hops, to the Trans-Alaska Pipeline. Michael Baker, whose environmentally sensitive arctic pipeline expertise and experience date back to the development of the famed 800-mile Trans-Alaska Pipeline in the 1970s, served as a key player on the project team, providing hydrology and pipeline design services.

Now, with CD5 up and running, ConocoPhillips is planning another NPR-A development that will further enhance benefits for the local economy, the State of Alaska and end users, and Michael Baker will assist.

ConocoPhillips, only a few years into the 21st century, had envisioned the $1 billion CD5 project and began laying the groundwork for the final configuration, which included a drill site, a five-mile gravel road with four bridges over channels of the Colville River and seven miles of pipelines back to the Alpine processing facility. Michael Baker served two primary roles: hydrology work, including bridge hydraulics and modeling and pipeline engineering.

The development sits on land owned by Kuukpik Corporation (the corporation for the village of Nuiqsut, about seven miles from the CD5 pad). As a result, federal regulators and local residents were concerned particularly about the project footprint and the crossing locations of the Colville River’s Niqlig Channel. That meant soliciting local input and developing strong economic and environmental partnerships. ConocoPhillips worked with all the stakeholders to minimize concerns.

Even with that cooperative spirit, the permitting process took more than 10 years for ConocoPhillips to attain all of the required permits, according to Jeff Baker, regional director for Michael Baker’s Anchorage-based Mountain Region. He says that his team — about 20 staff overall — kicked off the hydrology and design phases of the project even before ConocoPhillips completed the permitting process.

“It probably was more challenging than some other projects,” Baker recalls. “It took time to get through the permitting process and to get the technical issues ironed out.”

Given the extreme climate, the Michael Baker team faced many design and construction challenges on the North Slope — located about 250 miles above the Arctic Circle. First, as counter-intuitive as it may seem, construction must take place exclusively in the winter, when crews can drive on temporary ice roads to reach the construction sites. During warmer, ice-free months, motorized vehicles otherwise would disturb the tundra.

“The regulations are very tight,” says Toby Lovelace, an Anchorage-based Michael Baker project manager who worked on the CD5 energy project. “Ice road seasons are heavily regulated. The temperature of the tundra is monitored by regulators, and construction isn’t allowed to begin until the top layer of tundra is frozen and sufficient snow cover is available to protect the tundra surface.”

Of course, the frigid winters posed their own construction management challenges, according to Cory Wilder, Phoenix-based senior vice president and national pipeline engineering practice lead for Michael Baker. When temperatures plunged below -40 degrees Fahrenheit, as they sometimes do on the North Slope, all work had to shut down. A sensible rule to be sure, yet, with ConocoPhillips planning to complete CD5 in two short winter construction seasons, days lost to weather could prove crippling. Moreover, at temperatures that low, even the laws of physics sometimes run for cover.

Also counterintuitive, Wilder explains, is the fact that virtually all pipelines on the North Slope run above ground due to the region’s permafrost, a phenomenon that creates additional technical challenges. One, he says, is expansion and contraction of the pipeline system itself.

While a buried pipeline is constrained by soil friction, an above-ground pipeline maintains a freedom of movement to adjust to the extreme temperature range. With temperatures on the North Slope varying between -50 degrees Fahrenheit and +70 degrees Fahrenheit, one must anticipate quite a bit of movement. To accommodate all of that motion, Michael Baker designed expansion loops into the system to allow the pipe to move on fixed supports.

In addition, the Michael Baker team designed the arctic pipeline system to sit on support piles known as vertical support members (VSMs), which are installed by drilling oversized holes in the permafrost, then inserting the VSMs before back-filling the holes with a sand slurry. The installation is complete once the sand slurry freezes.

Interestingly, engineers determine the embedment depth of each VSM based on the forces necessary to resist “frost-jacking” of the pile out of the ground. In most cases, the upward forces of frost-jacking are greater than the vertical load being supported by the VSM. Not your typical pipeline installation, certainly, but Michael Baker engineers have accommodated such extreme conditions for close to 40 years.

Perhaps Michael Baker’s most important role during construction was remaining on call at all hours, ensuring completion of the pipeline project without unnecessary implementation delays caused by challenging weather conditions. As Lovelace notes, the construction season is so short and conditions so demanding that Michael Baker engineers must remain ultra-responsive to ensure that issues are addressed and delays avoided.

“We have to be very responsive,” he says of this specialized pipeline engineering. “We don't want to put a contractor on stand-by waiting for design answers. We need to turn things around very quickly when questions come up. Our construction support is basically 24-7.”

EARLY BOOTS ON THE GROUND

Wilder is quick to contend that few, if any, engineering contractors have more experience in arctic conditions than Michael Baker, which has been active in innovative arctic pipeline development in Alaska since 1971 and even hopped across the Bering Sea to assist ConocoPhillips with several 1990s-era pipeline projects on Sakhalin Island, Russia. Wilder points out that Michael Baker was the lead pipeline and civil engineering company on the original Alpine project on the North Slope, which was the feeder development for the jump into NPR-A.

“We were some of the first boots on the ground and utilized small reconnaissance teams to lay out the pipeline system, river crossings and airstrip by helicopter and on foot,” Wilder recalls. “It was a fun time to work on the project. We spent our days walking the islands and riverbanks of the delta, and our nights in the village of Nuiqsut.”

On Oct. 27, 2015, ConocoPhillips announced that CD5 would send its first oil – up to 16,000 barrels a day – to the Trans-Alaska Pipeline. Yet the significance of the project extends even beyond that historic development. CD5 is helping invigorate Alaska’s oil industry while also providing jobs and a valuable revenue injection for the State of Alaska, the Kuukpik Corp. and the villagers represented by that corporation.

"I'm really proud of the partnerships that allowed us to bring CD5 online," says ConocoPhillips Alaska President Joe Marushack. "It's 16,000 barrels of new production for Alaska, so it's a great story. It's incredibly important to the state and to the people of Alaska."

HEADING BACK TO THE NORTH SLOPE

The success of CD5, Baker says, has paved the way for additional construction on the North Slope. ConocoPhillips already has green-lighted its next North Slope development – construction of what has been named the Greater Mooses Tooth 1 project that includes a pipeline to carry more new oil out of the NPR-A. For that project, Michael Baker will reprise the vital roles it played on CD5.

“CD5 is a key development for the oil industry out here,” Baker says. “Throughput has been steadily going down the last several years. CD5 is a boost to help get that going. It creates jobs.”

Adds Lovelace: “To be the first project to produce oil from a drill site within NPR-A – that’s a huge milestone. Other developments near CD5 are in the news. This is just the first piece in something that’s much larger. I think there’s a future in NPR-A.”