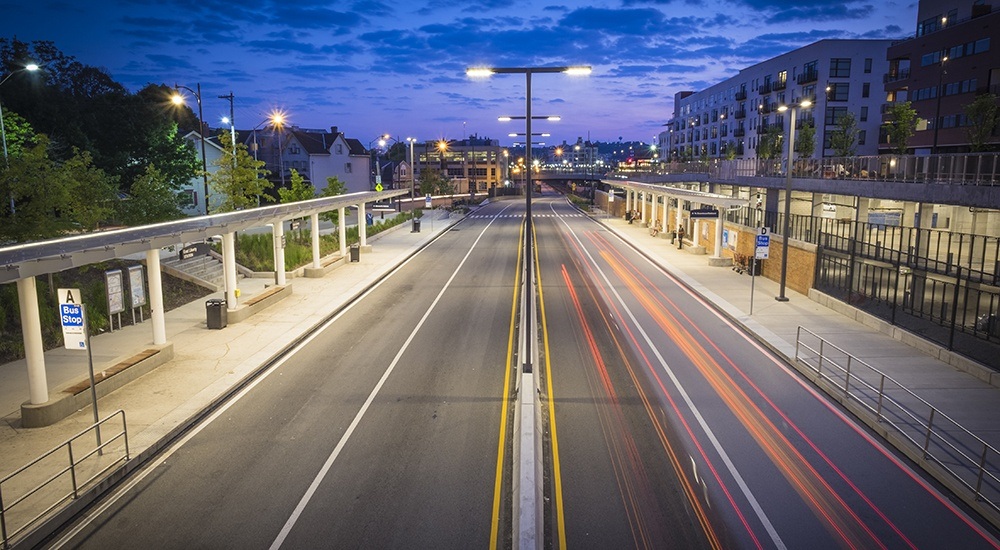 Pittsburgh’s East Liberty neighborhood, once considered this Pennsylvania city’s thriving “second downtown,” had suffered over the years from the effects of the city leaders’ well-meaning urban planning vision of the 1960s. As part of that vision, the planners in that decade converted a rectangular business-district street grid into a pedestrian mall with a one-way traffic circle around it.

The redesign served only to isolate the business district more than it already had been while also requiring the demolition of homes and some existing businesses in the process. Other businesses fled, as did some residents.

The 1980s, in an early effort to reverse the neighborhood’s fortunes, saw construction of the Martin Luther King Jr. East Busway, which used an existing railroad right of way to provide direct public transit access to downtown Pittsburgh. But it still fell short in improving the deteriorating reputation of this East End neighborhood. In time, the community would hit more than one new low as big-box stores came and went and Nabisco shuttered its old brick cracker plant.

Times are changing, thanks to Google, Target, Whole Foods, The Mosites Company, Bakery Square, local universities, UPMC, a residential building boom and a flurry of other recent renaissance activities. The key, however, could well be an overarching partnership that brought together government and civic leaders, universities, businesses and private developers to create and promote a transportation-oriented solution that should further solidify a lasting revival for this once-proud area.

This solution revolves around a critical factor in any modern urban renewal effort – improving access and connectivity. Who better to help manage such a complex development process than Michael Baker International and its construction management, transportation and planning experts?

“We believe we were chosen for this role because we cared about what they cared about,” says Michael Grosso, a project manager for Michael Baker’s construction practice who served as resident senior construction manager helping the developer to coordinate the many contract packages, design and architect teams, inspectors, owner parties and other stakeholder groups. “We became one of the strongest advocates for the success of this project.”

Many participants came to the initial planning table with their own perspectives, their own value propositions, their own desired outcomes, even their own sets of property rights. In response, the City of Pittsburgh, its Urban Redevelopment Authority (URA), the Port Authority of Allegheny County (PAAC), Mosites and a number of regional community development organizations formed a partnership to develop this mixed-use transit center.

The mission: To transform the existing site of the busway’s East Liberty commuter stop into a so-called Transit-Oriented Development (TOD) area.

To accomplish this feat, the partnership, with Michael Baker’s help, had to develop an extensive plan to relocate, expand and upgrade the site into an accessible, more welcoming transit center that would include: pedestrian bridges over the railroad and busway; new infrastructure for pedestrian/car/bicycle traffic; a new parking structure; new residential and commercial buildings; new street designs and traffic planning; and streetscaping to improve access to the center itself.

“This is the first time the city has put an emphasis on a transit-oriented project,” says the URA’s Rebecca Schenck, who served as the city agency’s primary point of contact for the project. “Pittsburgh had been built that way with streetcars decades ago. We’re getting back to that, and it’s starting to pay off.”

“Certainly, we recognize the importance of a project of this nature and its significance to the local community. This is the revitalization of an important bus system.”

It promised some disruption to the East Liberty neighborhood, but also promised significant benefits in the long run.

The large number of organizations invested in the success of the ELTC also meant that careful coordination of schedules, budget, safety, community relations and quality would become paramount. Ultimately, Michael Baker was selected as construction manager to orchestrate the overall project.

“Our job included tasks such as assisting the owner/ client team with implementing funding source management guidelines,” Grosso says. “There are very strict boundaries when it comes to federal funds. We helped build the project to budget while meeting various performance metrics and managing change orders to meet scope requirements. Michael Baker enjoys a great local reputation for construction management, and a high understanding of managing a federally funded project with all of the nuances and rules related to that funding.”

“Mike and I were out here when they were doing the midnight concrete pours,” says Dan Friday, a project manager for Mosites, in describing their partnership in overseeing the project. “We were in the trenches together. The Michael Baker team really was the eyes for the developer to ensure that the project was being installed and delivered as planned. There were lots of moments where [the team] ‘fought the fight’ for quality.”

The Michael Baker team also participated as contract manager with the owner’s contractors and designers with upgrades and modifications to local streets and intersections, such as improving access, safety, and business development through signalization, architecturally aesthetic pavement treatments, and landscaping to encourage pedestrian traffic to and from local businesses and the nearby residential areas of East Liberty and neighboring Shadyside.

KEEPER OF THE BIGGER VISION

Perhaps not surprisingly, the challenges inherent in carrying out such a large project with so many interested and invested parties could mount easily and rapidly. But here again, Michael Baker’s experience and expertise kept those challenges in check, according to Grosso.

“An integrated project like this uses different design teams that have to work in a cohesive effort,” Grosso explains. “With variables like that in play, it’s easy to get busy with everyday matters. But our job always was to keep in mind what the project was going to look like down the road. Michael Baker’s job was to make sure designers’ ideas and plans matched up, to prevent future issues and costs by being very thorough construction managers.

Michael Baker also focused on managing safety across the project.

“We made sure all of the contractors had safety programs in place,” Grosso says. “We paid great attention to safety, addressing any problems immediately in cooperation with our partners on the job.”

Of course, like most complex development projects, this one generated its share of unanticipated challenges. As part of the existing busway underwent demolition, project engineers had trouble locating a water line which they knew was under the roadway but for which no documentation could be found. At one point, work crews accidentally hit the line, and they projected that repairing it would create additional traffic problems around the location for a few days.

“The Mayor’s office called and said we can’t hold up traffic this way,” Grosso recalls. “So we worked with our partners to find a supplier of a concrete mix that would set in three hours. They did the work overnight, and the road opened the next day. That’s the kind of quick problem-solving we managed all through this project.”

With PAAC owning one side of the property along the busway, and others owning the facing side, agreements and coordination of plans needed to be carefully determined so that the pedestrian bridge, for example, could be built in proper fashion to meet in the same place in the middle. Also, the contract structure allowed design to be done in phases, reducing change orders, with sequential bids helping to coordinate who takes on which phases, depending on funds available. Michael Baker maintained a sense of continuity throughout the entire project on issues like these, Grosso says.

“We tried to be a lot more than a guy with a clipboard taking pictures,” says Grosso. “Our partners were great, working in the same spirit to help everybody think through issues. From Michael Baker’s viewpoint, we had to always remember that we’re not building it, we’re not funding it, we’re the ones making sure it all happens and it all fits.”

Michael Baker’s team also worked with the partners throughout the process to navigate budget issues and keep costs down.

“We had put ELTC out for bid, and it came back $2 million over budget, so we joined [Michael] Baker to go back to revisit the specifics,” says the URA’s Schenck. “For example, the pedestrian bridge originally had glass walls, and only one provider in the U.S. could handle it. The cost became prohibitive, so we went with an alternate design. We also had wanted concrete pavers but learned they would require too many replacements, so we went with an adapted design. We had to look at long-term costs at every step.”

Today, as the ELTC and related development efforts near completion, this six-acre, $90 million mixed commercial and residential TOD development already is providing a direct link from residences and businesses to the MLK Busway and Downtown Pittsburgh. It sports a new apartment complex with 360 units, a 554-space parking facility, a 120-space bicycle shelter, and 43,000 square feet of retail and landscaped space, tying together a renaissance of commercial, office, shopping, university, and residential establishments.

“ELTC is a model for public/private partnerships,” says Grosso. “A transit agency, various city agencies, private developers, all coming together for the greater good – we would love to clone this approach.”

That sentiment is borne out by PAAC ridership results already documented since the ELTC opened.