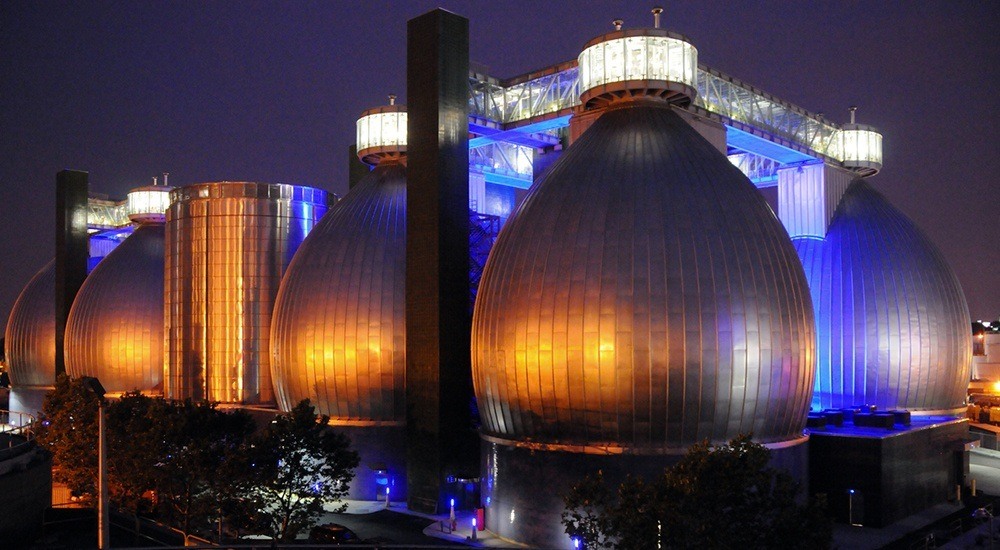 How Michael Baker and its partners managed the completion of an iconic treatment plant upgrade in New York City, saving millions and the environment – and creating a tourist attraction

Helping to bring a major urban wastewater processing facility into compliance with federal laws, even while greatly reducing the plant’s pollution of a vital waterway, would represent quite an achievement. Imagine, then, transforming that same plant into an award-winning model of modern infrastructure that also provides a waterfront nature walk and serves as an educational tourist attraction – all the while completing the project under budget by $71.7 million.

That’s exactly what Michael Baker International and its partners accomplished at the Newtown Creek Wastewater Treatment Plant in Brooklyn, N.Y.

The treatment complex, the largest of 14 wastewater treatment plants owned and operated by the New York City Department of Environmental Protection (NYCDEP), processes wastewater from sections of Brooklyn, Queens and Manhattan from its location along Newtown Creek and Whale Creek.

The underlying challenge: The plant had been plagued by a phenomenon common to wastewater facilities that combine the management of sanitary wastewater and stormwater — intake of excessive rainwater and stream overflow that often exceeded the plant’s handling capacity. During “wet weather” events, some of that untreated wastewater would make its way into the creeks and then flow from Whale Creek to the East River, polluting this waterway and damaging the ecosystem.

Following the establishment of a consent order with a major oil company, the U.S. Environmental Protection Agency in 2005 entered into a consent order with NYCDEP to reduce biologic and nonbiologic discharges into Newtown Creek. The upgraded NC-WWTP has exceeded the requirements of the consent order. The secondary treatment requirements of the federal Water Pollution Control Act of 1972 (commonly known as the Clean Water Act) mandate 85 percent removal of sediment and grit from treated wastewater; the new plant removes 92 percent.

To comply with the Clean Water Act, as well as the consent order with NYCDEP, NYCDEP developed a three-phase, $5 billion expansion and- upgrade plan. The third and final phase, which would prove the most ambitious, included four distinct projects: construction of a Central Residuals Building to remove all non-biological matter from wastewater; upgrading of the South Battery and Control Building, which provides grit removal, aerobic processing and biological setting; construction of a new sludge loading dock, including maintenance dredging of a Superfund site; demolition of the old East River Sludge Storage Tank and decommissioning of the East River loading dock.

HIGH-PROFILE “CITY WITHIN A CITY”

“We’ve performed construction management and design services for New York City for about 30 years, including work on the North River, Coney Island and Hunts Point wastewater treatment plants,” says Iris Giboyeaux, project manager in Michael Baker’s New York office. “This was the biggest project that we’ve done for them.”

As if the task weren’t complicated enough, the plant’s location elevated the degree of difficulty. The facility sits squarely in the densely populated neighborhood of Greenpoint, Brooklyn — Giboyeaux calls the plant “a city within a city” — and also along heavily traveled routes for water traffic, meaning that every step of the project required comprehensive and precise coordination with local elected officials and residents, as well as marine traffic using the waterways.

“The location of the plant made it a high-profile project,” notes Giboyeaux. “Our work was easily visible for close to a decade. “We were running all 12 prime contractors full time for at least three years,” she continues. “On any given day, we would have hundreds of men and women from different trades in the field. At one point, we had at least eight cranes on site.”

To interface with the public, the team worked closely with the Newtown Creek Monitoring Committee.

Says Nat Federici, deputy portfolio manager for NYCDEP’s Bureau of Engineering Design and Construction: “The community was heavily involved through the committee. We told them up front we would be as honest as we could be. I think they appreciated that. They had to live with 20 years of construction, and we wanted them to feel like they were part of the process, to know that they mattered.”

Because of the project’s complexity, the tri-venture continually faced the risk of falling behind schedule. To mitigate that risk, the tri-venture deployed an innovative technique called 4D building information modeling (4D BIM), which goes one step beyond the more commonly used 3D-modeling approach. The 3D-modeling approach allows users to view images of the project from all perspectives. 4D BIM, meanwhile, allowed the tri-venture to add the element of time, that is, to preview the planned future actions of any contractor or subcontractor to determine their potential impact on the completion schedule. If that impact were adverse, the tool’s “clash detection” feature would allow the tri-venture to identify and halt the procedure.

“It’s become standard now, but at the time we were doing that, not too many people had 4D BIM capability,” says Tom Zagorski, practice lead, construction services, for Michael Baker. “It allowed us to tackle more proactively the problem of having 12 contractors on site at the same time — and be smarter about it. You could see how the project was being built at any point in the schedule, and you could investigate problems before things were built. It was a great tool to look into the future and try to identify problems. It brought the project back on schedule and paid for itself tenfold.”

The 4D BIM tool proved its worth many times, Zagorski says, in one case detecting and forestalling a “clash” — an oversized pump that, if installed, could have slowed the project appreciably while costing unbudgeted dollars to repair. “It enabled us to deliver the project with a change order rate of only 1.2 percent,” Zagorski notes. “You usually see that in the 10 percent to 12 percent range.”

The tri-venture completed the bulk of the project in late 2014 — on time and, thanks to the efficiency noted by Zagorski, almost $72 million under budget (final paperwork and wrap-up are set for 2018).

The engineering/construction management industry has recognized such efforts by the tri-venture in a variety of ways.

The New York chapter of the American Council of Engineering Companies, at its 50th Annual Excellence in Engineering Awards Gala in April 2017, bestowed on the project and the tri-venture management team its Diamond Award, Wastewater and Stormwater category, and the National Honor award. The Engineering Society of Western Pennsylvania named the project “Project of the Year” in the Industrial category.

Even before the tri-venture completed the project, the project also won the 2013 Excellence in Environmental Engineering and Science grand prize for design for the South Battery upgrade, and the development of the Central Residuals Building was featured in the March- April 2014 issue of CMAdvisor, the national newsletter of the Construction Management Association of America.

Perhaps even more significant are the multiple benefits to NYCDEP and the residents it serves. First and foremost, the initiative increased the plant’s daily wet-weather-processing capacity from 310 million gallons to 720 million gallons, a 132 percent increase in capacity that means a significant reduction in untreated water escaping the treatment facility during heavy rains. As a result, the agency effectively reduced East River pollution and satisfied the requirements of federal law and the consent decree.

The environmental benefits don’t stop there. To creatively use the gas produced by the digesters, New York City and several private-sector partners teamed to begin a bio-gas program that is expected to heat nearly 5,200 homes while reducing annual greenhouse gas emissions by more than 90,000 metric tons annually. To increase the production of bio-gas for home heating, the city and its partners arranged to have pre-processed organic food waste from school lunches delivered to the plant and added to the digestion process.

“What made this project unique for me,” Giboyeaux says, “is the huge environmental component, which you won’t see on other infrastructure projects outside of the NYCDEP. We had to help our client meet a consent decree or expose it to potentially millions of dollars in fines. It was a very crucial project for the residents of New York City and the surrounding environment. A project this size probably won’t happen too often in my career.

“We had to accomplish this massive undertaking while keeping the plant operational," she adds. “It’s like performing open-heart surgery, except the patient is the wastewater treatment plant, and it’s very much awake during surgery. There's zero room for error on a project like this. Without the appropriate resources of a group of highly trained professionals at the top of their game, it wouldn't have been possible.”

A NATURE TRAIL, TOURS…AND A VIEW OF MANHATTAN

Moreover, NYCDEP put the under-budget cost savings to productive use on behalf of local residents. NYCDEP created a quarter-mile nature walk, designed by acclaimed environmental sculptor George Trakas, as the the first phase of an amenity at the plant that eventually will include a community park and a pedestrian bridge across Whale Creek.

Even more improbably, the eight signature digesters, which offer unimpeded, breathtaking views of Manhattan from a glass-enclosed observation deck, have become both a tourist attraction and a popular backdrop for film crews. The digesters appeared as nuclear reactors in the movie "Wall Street: Money Never Sleeps" and as an Indian chemical plant in an episode of "Madam Secretary."

Tours of the plant itself can prove surprisingly fun, NYCDEP’s Federici says. Case in point was a series of Valentine’s Day events a few years ago, when the NYCDEP gave every participant a chocolate Hershey's Kiss, which is similar in shape to the digesters, courtesy of The Hershey Company. However, those tours imbue a serious purpose as well. When it hosts school groups, professional organizations and environmental groups, NYCDEP uses the opportunity to educate them about the role of the Newtown plant.

“We usually start the tour with a 30- to 45-minute presentation on what we do here,” Federici says. “Then when we take them to the top of the digesters, they have a bird’s-eye view of the entire facility and can see in action the processes we just described for them.”

One final benefit: Impressed by the 4D BIM capability which Michael Baker and its partners introduced, NYCDEP has included it as a requirement in a number of subsequent Requests for Proposals. That ensures the benefits of the Newtown project will spread to future developments as well.

Federici, who has worked on the initiative for 11 years, considers the Newtown Creek upgrade a “once-in-a-career project.

“One of the greatest satisfactions is knowing the community has something that’s a source of pride,” he says. “Usually, a wastewater treatment plant is something you want to hide or mask. Here, new facilities across the street are mimicking our architecture. We’re a centerpiece, an educational center for our department. That adds a piece you normally don’t find.”